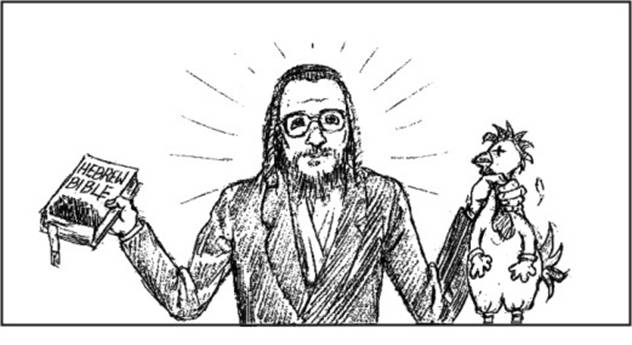 My name is Moshe and I am a Chassidic Jew who has, from my youth, learned the words of our Holy Prophets, and has been puzzled by their meaning. Then, on the day before Yom Kippur, I contemplated the solemnity of the day and was made aware of the amazing meaning of G-d’s words. I recognized the fulfillment of 42 Messianic prophecies of the Tenach, and they changed my life forever.

Early in the morning I went to get my rooster to fulfill the ancient custom. There in the light I looked into his eyes and saw fulfilled the words, ‘I am the rooster[1] who has seen affliction.’[2] I took him and swung him around my head as the verse says, ‘And he circled his head[3].’[4] I moved my hands as I swirled him, as it says, ‘Only against me did he turn his hand.’[5]

With this he leaped from my hand and started to run. As it says, ‘They have run away without seeing good.’[6] I cried a short pray to HaShem as it says, ‘My words I say out of the bitterness of my soul.’[7] He ran from me, fulfilling the verse,  ‘To me they showed their back and not their face.’[8]

As he ran, I borrowed a cane from a man near me so as to catch him with the rounded edge, as the verse says, ‘And Moshe took the stick.’[9] I tried to catch him with the hook, but only the blows of the cane hit his back as it says, ‘Afflicted by the rod of his anger.’[10] and it also says, ‘I struck you with the blows of an enemy.’[11] He turned to me and I got him right on the cheek fulfilling the verse, ‘I have offered my cheek to the one who strikes me.’[12]

He ran from me into a dark corner and I followed after him, as the verse says, ‘He has led me and driven me into the darkness and not light.’[13] I had him there in the corner as it says; ‘All her pursuers overtook her in the small place.’[14] He stood there, silent, in fulfillment of the words of the prophet, ‘He was persecuted and afflicted, but he did not open his mouth.’[15] In that corner there was nowhere for him to hide from me as the verse says, ‘Can a person hide in a concealed place, and I should not see him?’[16] He was now trapped as the verse says, ‘He has walled me in so I cannot escape.’[17]  In his eyes I could see him praying silently to HaShem, ‘My G-d my G-d why have you forsaken me?’ [18]Clearly it was fulfilled for him, ‘The mighty ones of Bashan encircle me.’[19]

I grabbed him and he started to call out to HaShem. As the verse says, ‘My G-d, I call to you by day and you do not answer and by night and there is no respite.’[20] But there was no answer as it says, ‘Though I would scream out and plead he shut out my prayer.’[21] It was clearly the end. I grabbed him and took my place in the line waiting to give my rooster to the shochet (ritual slaughterer.) He was silent, ‘Like a sheep being led to the slaughter or a ewe to her sharers he did not open his mouth.’[22]

The shochet took him by the neck as it says; ‘He grasped me by the neck.’[23] With that he screamed out, ‘Be not far from me because distress is near and there is none to help me.’[24] He also said, ‘Save my soul from the sword.’[25] The shochet slaughtered him fulfilling ‘He was removed from the living land.’[26] He let the blood fall on the floor, as it says, ‘I am poured out like water.’[27]

I took the dead chicken and gazed at it as the prophet says, ‘They have looked upon me whom they have pierced.’[28] I took it to be made kosher. We separated it into pieces snapping it’s bones as the verses say, ‘All my bones became disjointed.’[29]  ‘He has broken my bones.’[30]

Then I took him home to cook. My wife removed the skin as it says, ‘He has worn away my flesh and skin.’[31] She placed him in a pot with water, as it says, ‘For the waters have reached unto my soul.’[32] She added many spices as it says, ‘And she gave …many spices.’[33] She covered up the pot so it could cook as it says; ‘He has placed me in darkness.’[34] The smell of it filled the room as it says, ‘That the spices may flow out.’[35]

After that it was served on the table and we gazed upon it as the verse says, ‘I count my bones and they gaze and look upon me.’[36] He was divided among the members of my family, as it says, ‘Therefore I will divide him among the many.’[37] We rejoiced and sang as we ate him, as it says, ‘I have become a thing of laughter for my people, they sing all day long.’[38] ‘In him our hearts were joyful.’[39] After which we were full and praised G-d as it says, ‘You shall eat and be satisfied and praise HaShem your G-d.’[40] We truly saw the goodness of G-d as it say, ‘You should taste and see that HaShem is good.’[41] There were many more messianic prophecies that I could have added that applied to my messianic rooster. Many more he will fulfill when he comes back in glory.

In all seriousness the above example is no different then the lists claiming 200/300/400 prophecies fulfilled by Jesus. They claim the odds against a single person fulfilling them are astronomical. Likewise their claims that passages like Psalms 22, or Isaiah 53 are about their messiah/god. Consider this well when you see or hear the claims made by missionaries or just simple Christians who you may meet. If not the following prophecy may apply: ‘They are a people bereft of council and they don’t have understanding.’[42]

For more information, questions answered, or help with missionaries you can reach Moshe Shulman at outreach@judaismsanswer.com.